We met at the usual starting weigh point at 8:00 AM Saturday morning. A few Scouts straggled in later, but for the most part, everyone was awake 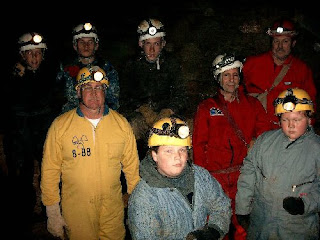 and ready to go to the Cave. We had 5 Scouts and one leader, two if you include me. Well, it's the Troop I'm associated with and my name was on the Tour Permit. So I was leader number two for the Scouts. There were four of us from the Grotto as well. Amos, Bob, Steve, and myself where there to take these guys caving. Three of the Scouts have been caving before. For two of those, this was their third caving trip.
When we arrived there it was still raining. Not as heavily as it was in Morgantown, but it was still coming down. This really made you want to get changed and in the cave faster. We went in the entrance and gave "the talk" where it was a little drier. We divided up into two groups and proceeded through the entrance. Steve and I had Billy, Bobby, and Mike the Scoutmaster. Billy and Bobby had never been in a cave before. I'm not even sure they've been in a commercial cave.
I guess going through this cave on a regular basis, it's almost like walking down the sidewalk for most of the cavers. These guys saw it as an adventure into a world they'd never seen or could imagine. The little chimneying in the beginning started to unnerve Bobby a little. With a little coaxing and some positive encouragement he really did well.
Steve was in the lead and went straight for "the pit". There's a 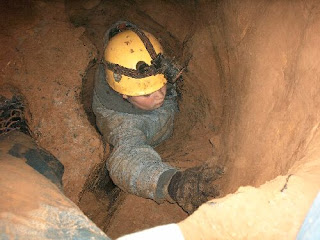 bit of crawling to get there, but nothing too tight. The boys looked down the whole trying to figure how to get down there. Then we showed them the back way and circled around to look back up the pit from the bottom. A great "Kodak moment" was seen and I scrambled back up to the top and took pictures of the boys looking up.
Billy had a notion to climb up "the pit". With Steve on the bottom and me up top, we talked and spotted him while he pushed and grunted half way up before he conceded and slid back down. Ok, time to explore some more. I circled back to pick up my pack and Billy decided to come up top and follow me as I paralleled the others to meet them in the next room. Somehow, during a crawl, I had this notion I should zipper my pocket with the camera in it next time my arm was free enough to reach it. I pushed my pack forward and rolled a little and that's when I saw it. Something out of the corner of my eye rolled down a little hole. Realized what I thought it was I touch my pocket to see if my camera was still there. The empty pocket gave me a sinking feeling of dread.
I let Steve know so we could stop and asses the situation. Yep, my camera went down a hole that was too small to crawl into. We looked around for another entra 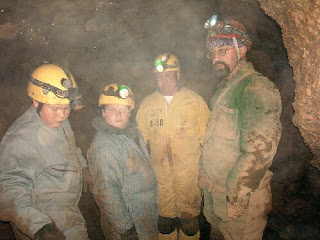 nce to that hole. A small possibility in a very tight squeeze, but nothing that I could do about it right then. Steve and I knew that Amos could squeeze smaller than either one of us, so we opted to continue on until we crossed paths with the other group. Beside the Scouts were there to cave, not look for my camera.
As we continued we did connect with the other group and let them know what happened. They were on their way to "the pit" anyway, so they thought they'd take a look. I showed them the spot then joined back up with my group touring in progress.

Inserted report from Bob;
"From the other groups point of view on the trip. Once in the cave our group initially headed off to the Hanging Rock room. We knew that to get to it there was a tight crawl and there would be climbing over huge rocks once we got there. Our group had the more experienced cavers from the Scouts, and were able to go into the tighter crawls. We also did some exploring down some of the tight crawls to see if they went anywhere. Some didn't go very far but the Scouts followed no matter how tight it got.
Once we met up with Allen, Amos wanted to try to dig out the camera. He started digging while I kept the Scouts exploring but not very far from where Amos was. All three Scouts made their attempts at scaling the chimney and stuck with it until they all made it to the top. Later once Amos was back with the group they all scaled the chimney once again. Good job by all those Scouts.
Bob"

The rest of the trip went off with out a hitch. The boys started getting tired after about two and half-hours, so we headed out. These guys didn't get to see the whole cave. It can be big to an 11 year old and too much for one trip. Maybe next year they'll come back and see the rest.
Outside we exchanged stories between the two groups and talked about the camera. Being as stubborn as we are we thought it would be worth while to make another attempt at retrieving the camera. Bob stayed with the Scouts to make sure they were OK with returning the gear they borrowed and getting cleaned up and directions back to the highway. Amos, Steve, and I went back inside to the scene of the incident.
Steve and I soon found out what Amos had been up to. The hole was considerably larger than when I drop my camera. Considerable is a relative term, but considering that he only had a pocketknife to dig with, it was a considerable hole. And he jumped right in where he left off. Chunks of mud the size of hamburger patties were flying off and out of the hole. After a few minutes Amos exclaimed that he could see the camera. Now this was inspirational. We can't leave now. Not when it's in sight. In sight but just out of reach.
We had the foresight to bring a couple make shift tools back with us. A flat board for shoveling and a long stick with a hook for reaching. We tried everything to reach that camera, but nothing worked. Amos even had the bright idea to take off his boot and see if he could stretch his leg down the hole and pull it closer. The stick almost worked, but there was the fear of the camera falling further down the unknown hole. 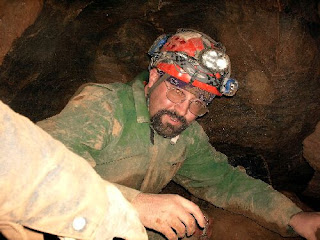 After about two hours of taking turns with ideas and digging, Steve came up with an idea that seemed to almost make sense. He wove some climbing webbing into a pouch and tied it to the end of the stick making something similar to a lacrosse stick. He also taped a flashlight to the stick to see more of the inside of the hole. So headfirst into the hole he went.
Body language is a strange thing. You can tell what a person is doing even by the wiggle, or lack of, of their feet. Steve got very still and quiet. Then a quick jerk, then still again. Then a quick scramble backward out the hole. He had the camera. Two hours of patents and hard work finally paid off. Our first cave rescue was a success. The camera was a little muddy, but still working. All the pictures were recovered. I hope I never have to do that again.
Please visit my photo album from this trip.

Back to home page.