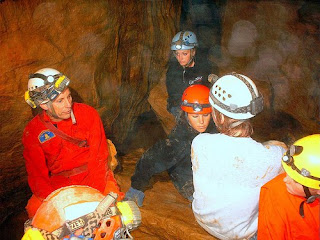 They are a great bunch and fun to be around, so the motivation to get them into the schedule was there even though it was full already. We found September 6th to be a good date for mostly everybody.

Saturday morning Amos, Steve, John, and myself met at the McDonald’s parking lot and piled into the Montana and headed west on the Turnpike. What was left of the hurricane was blowing rain. The forecast didn’t look all that great, but we would be underground most of the day.

We were all to meet at a rest stop. The Crew was running a little late. After a few phone calls back and forth we found out where they were and got their course corrected and headed toward us. We finally got all colle 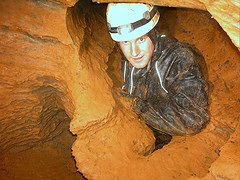 cted together and headed to the cave.

When we arrived it was still raining. It’s not much fun getting dressed in the rain and getting wet before getting in the cave. Everybody made the best of it and remained excited about the adventure. So we set off to the cave as quickly as we could and got inside it to settle in and get everybody adjusted.

After a few technical adjustments and the standard “Cave Talk”, we had them divide into two groups. Steve lead one group, Amos lead the other. I swept Steve’s Group, John swept Amos’s group. One of the things I like about sweeping is that I can take occasional short cuts and swing into position to take some pictures of the folks we are caving with. With six in our group I had a chance to take a few snapshots. 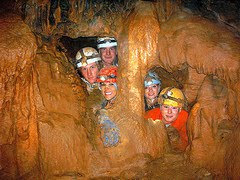 We did the whole standard type tour and ran these guys though the passes. They did exceptional and tried many squeezes and climb that we normally don’t do. Time does go by faster when you in a cave. We finally crossed paths with the other group after about three and a half hours. We conferred for a while to see how everyone felt and what they wanted to do. A few had enough and wanted to go out and few still wanted to cave some more. Steve and I took a small group of exhausted cavers out the entrance and noticed that it had stopped raining. Then Steve and I headed back in to catch up with the last group.

When we caught up to them they were still going strong. We went into a few more crawls and rooms and took a few mor 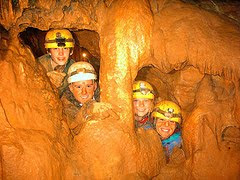 e pictures. I think we cover every inch of that cave that day. We finally emerged five and a half-hours later. Usually we do a 2 or 3 hour trip, but these guys just wanted to see and do more. It was a little bit nicer out side now, so we took our time getting changed and talked to the Crew and set up a plan to start planning for their next trip. We didn’t get out of there until about 7:30. We were tired and hungry and settled for fast food and headed home.

OK, so what are we going to do next year to top this trip?