On Saturday, March 19, 2005, 9 members of Crew 5, of West Chester PA, planned to cave. Members of the Philadelphia Grotto guided this quest for adventure.

Crew 5’s plan was to do more than just go caving, they wanted to get a taste of as many aspects of caving as they could. To do this they decided to earn the Caving Elective of the Ranger Award. This elective 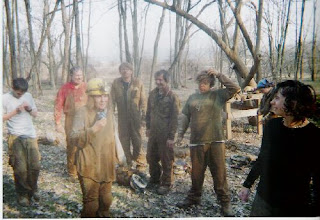 So the plan was to enter the cave about 11:00 to 11:30. But before we went in there was a quick demonstration by Landon on Carbide headlamps and how they work. This was followed by the all-important "Talk" by Amos on last minute safe caving.

We divided into 3 groups and entered the cave. Fortunately, a couple of the adult leaders have caved before with other grottos. We were able to have one of them as a sweep.

Peiper cave is a maze cave. It is relatively easy and makes a great "first trip" for novice cavers. There is some climbing, but nothing too high or exposed. There is some crawling through mud. There are passages that have high ceilings and easy walking. There are also bats that seem to like to hang in places that make them susceptible to being knocked down. You really have to watch yourself where you put your hands and feet. Fortunately, non were disturbed.

Another advantage is that this cave is big enough that the three groups could cave without bumping into each other, unless that is the plan.

As usual, time just slips away while in there. The exit time of 4:00 PM crept up real fast. We did make it out on time, but, as usual, my group was the last out. "Just making sure no one was left behind."

After all were out and accounted for, we changed and tried to clean up. The Crew found out that you never really get all the mud off and sometimes you just have to except going to get something to eat with traces if Peiper left on you.