June 14, 2014
Troop 214 from Helena, Montana participated in a caving trip to the Argenta Cave in Southwest Montana. This trip was the end goal of the Venture Patrol that began last year with a presentation on caving from Vern Bowden, a member of the National Speleological Society, an introductory trip to the Dragon’s Breath Lava Tube in Idaho, several training sessions to practice rappels and vertical rope climbs.
The trip to Argenta started with mapping the location on the USGS quad map with coordinates provided by Vern. Most caves are no longer shown on quad maps due to vandalism. It is recommended to contact the local Grotto to find out more about caves in your area and to enlist a caving guide to assist with training, cave etiquette, and proper cleaning procedures to limit the risk of diseases to bats. 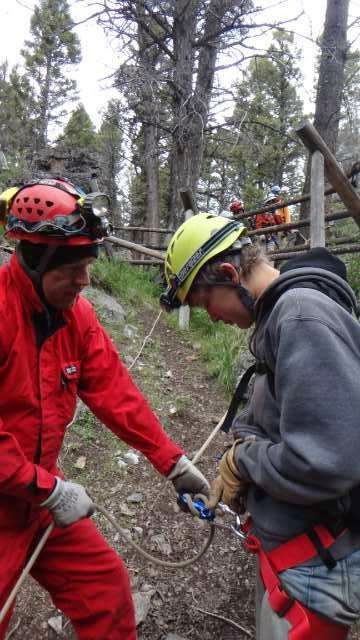 The two hour trip brought the Patrol to a primitive campground after seeing elk, deer, jack rabbits, and a bald eagle. Bear scat was evident in the area and numerous wildflowers were in bloom. It was estimated that snow must have left the site about two weeks prior to our arrival. The patrol unloaded, setup camp and then had a great game of bocci ball to pass the time away. It appeared that we might get rained on, but the storm clouds passed us by. Since the snow was melting at higher elevation, a local creek was running high. A few hundred feet away from the cave entrance, the creek disappeared into the ground.

Vern and his son Anthony (affectionately known as Crunch) arrived at the site about 8am and rigged the ropes, a primary and a backup, at the entrance to the cave. The Patrol finished breakfast, donned caving harnesses & helmets, checked for three sources of light with backup batteries, water, pee bottles, first aid, and snacks. The Patrol members checked each other’s harnesses and we arrived at the entrance to the cave. 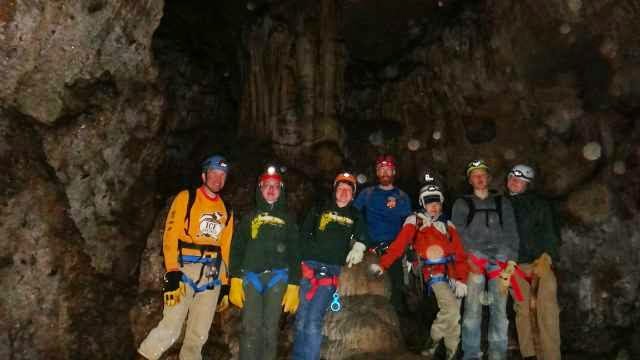 The entrance to the cave has a perimeter wooden fence that served as a boundary. Crunch entered the cave first with a cry of “On Rope” and Vern remained behind to ensure that each scout was properly harnessed and gave the proper commands. The descent to the cave is estimated to be about a 40 foot drop. The first part was near vertical with ice clinging to the rocks, making for a slippery rappel. The last 15 feet was pure vertical with no wall to brace your feet on. While scouts were descending on either 8-rings or ATC’s, Vern commented on the ferns that grow around the cave entrance. This is fairly common at the entrances to caves that breathe, helping to maintain a somewhat constant air temperature year round. We used 11 mm pit rope for this and one of the ATC’s could not be used due to the very stiff nature of the rope. This rope is much stiffer than static rope and much stiffer than dynamic rope used by climbers.
When all of the scouts finished their rappels, we proceeded into the darkness. We climbed down a rocky path and observed ice goblins (stalagmites made of ice). Deeper in the cave, Anthony setup another rope to assist with another climb down. This rope was left behind to help us climb back up on the way out. Vern and his family have been to this cave many times in the past and seemed to know their way around extremely well. Vern and Crunch have been to caves all over the country and have found and mapped new caves.
The Patrol took a photo by a large pipe organ formation. Names were seen all over the cave. This is not what we do today as it takes away from the cave. The cave is a unique environment and we leave nothing behind except our footprints. Older signatures from as far back as the 1860’s were observed written in the soot from carbide lamps. Long before batteries lit the way.
We turned our lights off at one point in the trip and made sounds like a cave animal. Thankfully, no answers came back. We did keep out eyes open for bats, but none were seen. 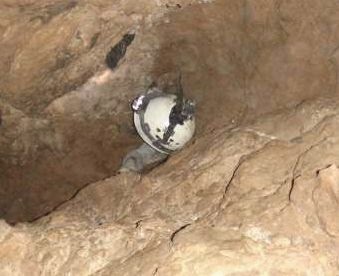 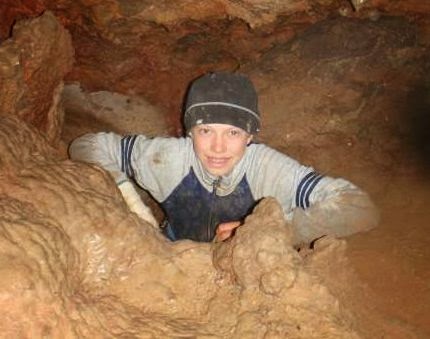 Most of the cave was tall enough to stand in, but to access some locations, we had to get on our hands and knees, and then on our bellies. The Mousehole was one of these locations. To get there, you had to wiggle on your belly backwards for about 20 feet. The Mousehole seemed to be only 12” wide but must have been larger. It is actually 6”x18”. Crunch and Daniel were the only ones able to enter the chamber beyond the hole. Crunch commented that someone appeared to have been working in the chamber as it now goes back another 8 feet from the last time he was there.
Moving though the caves, Vern commented on stalactites that were destroyed by vandalism. It will take hundreds of years to regrow these unique structures that hang from the ceiling. Crunch showed us how the calcite deposits would glow from lights. It would be difficult if you had to rely on the light provided by others in some of the tight crawl spaces. 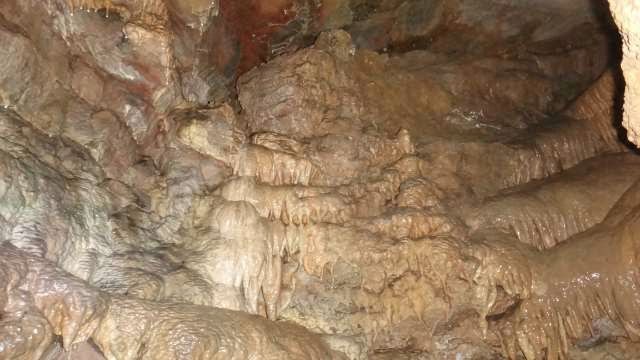 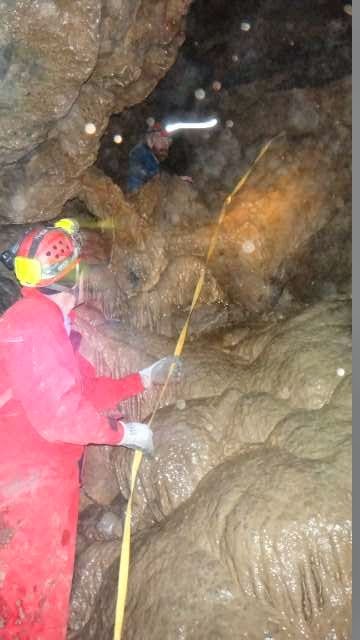 We climbed up to the “Lake” by climbing up about 12 feet to a ledge and then climbing up another 10 feet or so. We crawled on our hands and knees to the “Lake” where we crossed while attempting to stay dry. The “Lake” is a puddle that is about three feet wide and around 6-9” deep. There is no way around the “Lake”, so we had to go over the top of it. Most of us got wet. Right after that was another small crawlspace that required you to wiggle on your belly to get through.
This opened up to a larger chamber. Coming out was a lot easier that going in, simply because you knew that you could do it. This was described as being a little larger than a birth canal. A caver’s terminology. 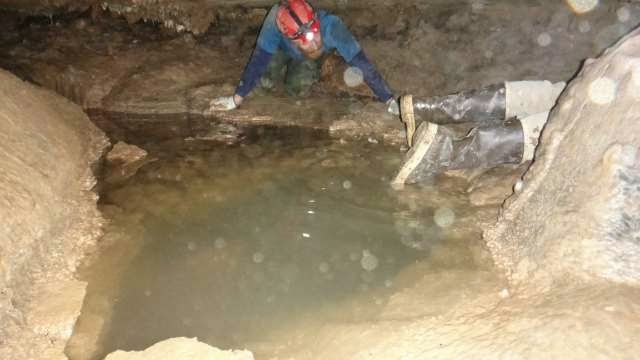 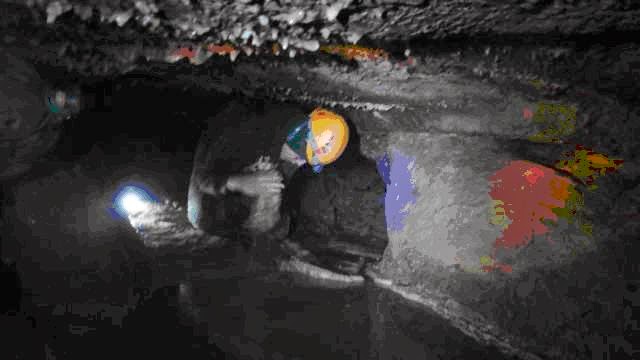 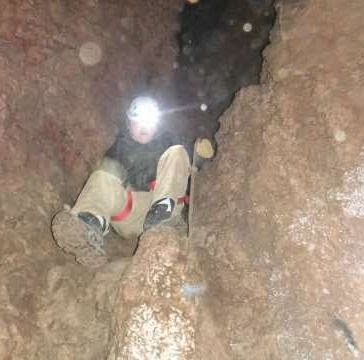 One part of the cave had old spikes hammered into the wall with a rope hanging down. Daniel and Brandon each made it to the first ledge and then guided back down with words from Ed, an experienced mountaineer.
Other small holes were accessed and smiles were evidenced on all, including Mark and Jake. “This is fun” was heard from more than one scout as well including Logan who had nothing but happy thoughts. 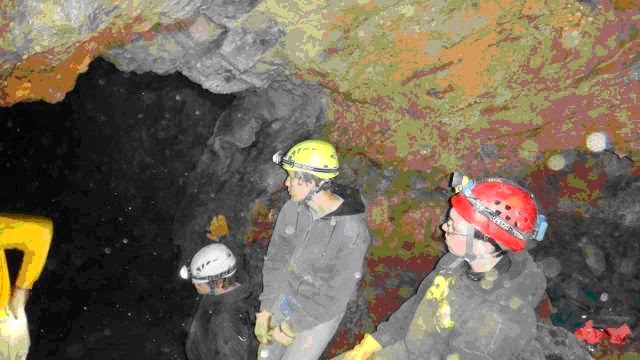 In all we learned new skills, overcame our fears, and pushed ourselves to places that we never thought we would go. Lots of encouragement was shared all day and this helped us to continue on. No one was pushed into places that they did not want to go. 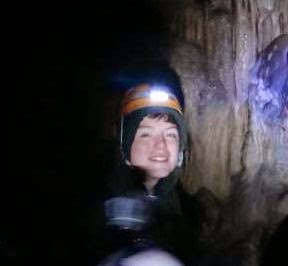 We arrived back at the entrance and put on the ascending part of the harness. Most of us used the Frog system to ascend, and two used the ladder system. The Frog system is typical for cavers, and is comprised of a chest mounted Croll and a hand ascender with a foot loop. The ladder system is mostly used by mountaineers and climbers and uses two hand ascenders and a foot strap. Individually, we climbed vertically up the rope for about 15 feet where we met a ledge where the rope held tight to the rocks. To get past the ledge, we had to detach the hand ascender and reattach it to the rope past the ledge. We continued up past the ice towards the light and near the end we were able to climb without the use of the ropes. Safety was adhered to at all times and no one was injured.
A group photo was taken at the end. In all we were in the cave for about 6 hours at a constant 41 degrees. If you asked any of us how long, we wouldn’t know if it had not been for watches. I’m not really sure if time stood still while we were gone or if it sped up. The outside world was foreign for only a few seconds while we readjusted to the warmth and the light of the sun. Even though it was obscured by clouds and a slight snowfall.
The Boy Scouts are fortunate to have members like Vern and Anthony who are willing to share their experiences with us. We will preserve the caves like we preserve our memories. Leave only footprints. 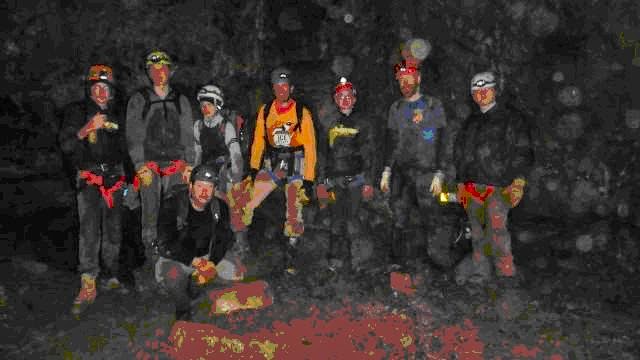 If you want more information about taking youth groups caving, or you’re just curious about what’s involved with getting kids underground, visit the National Speleological Society Youth Group Liaison Committee at www.caves.org/youth. Or you can email me directly at allenmaddox@youcave.org. I’d enjoy hearing from you.


Subscribe to our newsletter Join me on Twitter @youcave. Check us out on Face Book and Google+. And share us with your friends. If you ask a question in the comment section I’ll get back to you as soon as I can. 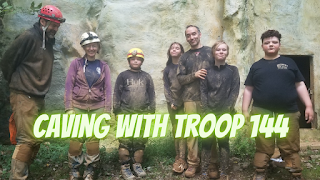