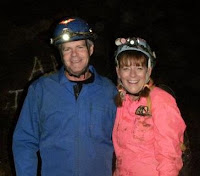 Brenda Shultheis is our guest blogger this week. She explains what she and her husband John do, "John and I are members of the NSS, Eastern Indiana Grotto, Indiana Karst Conservancy, and Indiana Speleological Survey. We’ve been caving since the late 80’s. We do everything from taking kids and scouts caving to exploring and surveying one of the longest caves in the US Binkley’s Cave to conservation projects and cave clean ups. We love to share our passion for caving with new cavers in hopes of inspiring a new generation of cavers. That’s John and Brenda in a nut shell and you’ll never see one without the other."

I always say caving with scouts, never a dull moment, always a great time. This trip was no different. We met a 10 am at Lowes parking lot. It would be five cavers and fifteen scouts and their parents. Not a bad caver to newbie ratio.

After bathroom breaks and a few minutes getting to know everyone. We all got loaded up and headed to the cave. It took a little while to get everyone suited up. 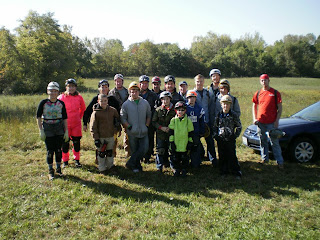 Earlier in the month I had done a presentation for the scouts at their last meeting showing them what kind of caving clothes and what should be in every caves pack. Most where well prepared some not so much. Nothing that would make them not be able to go. Let just say I nicknamed one of the scouts cotton socks and another tennis shoes. We took a quick group photo and then the trek to the cave. It was a short hike to the cave entrance.

The look on the scout’s faces was priceless when they saw it. It’s a highway culvert with an iron grate over it. It’s about 6 foot around and about 40’ till you enter the cave. The large group moved slowly at first but once they got their feet wet (pun intended) they moved a little faster. Donahue is a great cave for newer cavers. Lots of things to look at and plenty to keep them busy.

We decided to stay in the river passage to see all the natural bridges. All 30 of them. At first they are high above your head then they get lower and lower. You either have to climb over them or crawl under them. Great fun with a cobble floor and water.

All the boys were doing great. The littlest was so cute and smart. Then there was the young natural caver. He moved through the cave like he’d been doing it all his life. All 12 years of it. His mom wasn’t bad either. I could see where he got it from. Girls Rock!

We had negotiated all the bridges and were now at the flowstone choke. This is where boys become men. It’s a short bathtub bellycrawl with about 4’’ of airspace. We gave the boys a choice they could do a through trip out the spring entrance or start the trip back out. A little over half took the challenge. John went on through so he could take some video then I went in so I could make sure they got through the worse part of the bathtub. One by one they started through. They all did great but one who got a little panicked. No worries I grabbed him and pulled him through the last few inches. He got a little gulp but was fine.

After the bathtub the cave changes character. It gets really big with 70-80 foot ceilings then it gets small and looks like gun tubes. It twists and winds then gets a little bigger and then turns back into walking. Soon you can feel the outside air. The water gets deeper and low and behold a large entrance overlooking the White river.

We sat there for a little bit and had our cave snacks. It’s a shorter trip just to go back through the cave than over land so we headed back from where we came from through the cave. By time we got back to the bathtub the others had already headed out with some of the little ones.

The trip out was uneventful and as always took half the time it did to get in. All the boys did great and had a great time. We headed back to the scouts camp and had Steak and taters around the fire talking about the day adventurers.
A good time was had by all the future cavers.